International Day of Women and Girls in Science 2021

International Day of Women and Girls in Science 2021

On 22 December 2015, the UN General Assembly decided to establish an annual International Day to recognise the critical role women and girls play in science and technology. The International Day of Women and Girls in Science, celebrated on 11 February, is an opportunity to promote full and equal access to and participation in science for women and girls. It aims at aims at raising awareness on the issue celebrating women’s excellence in science and reminding the international community that science and gender equality have to advance hand-in-hand to address major global challenges and achieve all the goals and targets of the 2030 Agenda.

Tackling some of the greatest challenges of the Agenda for Sustainable Development — from improving health to combating climate change — will rely on harnessing all talent. That means getting more women working in these fields. Diversity in research expands the pool of talented researchers, bringing in fresh perspectives, talent and creativity. This day is a reminder that women and girls play a critical role in science and technology communities and that their participation should be strengthened.

2021 Theme: Women scientists at the forefront of the fight against COVID-19

The outbreak of the COVID-19 pandemic has not just clearly demonstrated the critical role of women in general but also in their jobs as researchers in different stages of the fight against COVID-19, from advancing the knowledge on the virus to developing technics for testing and finally the vaccine against the virus. At the same time, the COVID-19 pandemic also had a significant negative impact on woman scientists, particularly affecting those at early-career stages, and thus contributing to widening the existing gender gap in science, and revealing the gender disparities in the scientific system, which need to be addressed by new policies, initiatives and mechanisms to support women and girls in science.

EFDN has launched a programme that promotes STEM education among girls and boys: the EFDN STEM Football & Education Programme. It is a pan-European project selected for financial support from UEFA Foundation for Children aiming to promote STEM Education amongst European youth. STEM – Science, Technology, Engineering, and Mathematics – is the field that helps children learn how to program, make codes, and understand technological devices. Statistics tell us there are currently more than a million job vacancies in the STEM industry, while at the same time only 16% of college students graduate in STEM fields or subjects. Demand for STEM jobs increased three times between 2000 and 2010, and continues to grow, with many new fields and professions emerging each day. With the support of project partner Sphero and their supplemental resources, EFDN plans to deliver STEM Education programmes across Europe using the power of football to keep children engaged and committed to learning.

There are many female football players who have returned to their sport after their playing career as scientists, supporting those who are now scoring the goals on the pitch, as doctors, physiotherapists, analysts and in many more jobs.

One of them is Birgit Prinz. She won two World Cup trophies, three FIFA World Player of the Year awards and was one of the best football players on the planet for many years. She studied at the Goethe University inn Frankfurt and worked as a researcher at MSH Medical School in Hamburg. She has contributed to several papers published in scientific journals. After playing her last games in 2011, she took a job as a sports psychologist at TSG Hoffenheim and started working with the German women’s national team before the World Cup in 2019. More and more teams are employing psychologists to help players handle the complex mental issues and pressures that can arise within modern sports environment. The example highlights an issue in women’s football: every player has to start a second career because, even though pay has increased in recent years, women do not make nearly the same as their male counterparts.

Another example is Ellie Maybury. After studying material technology with sports science at the University of Birmingham and working at Nike’s European Headquarters in the Netherlands, she pursued a Master’s degree in Exercise Physiology because she wanted to work with athletes. Now she is the High Performance Coach and lead sports scientist for the Youth Women’s National Soccer Teams in the United States. She works with all eight of the youth teams and her goal is to find ways of developing the best football players in the world. Her work is split into two main areas: on-camp (training the athletes and spending time with them) and off-camp (data about the players is sent to her and she analyses and reviews it, in order to create the optimal training programme for the players). The data is collected via apps where athletes log information about their sleep, nutrition or menstrual cycle. For her, “working in STEM it means you’re creative, you’re innovative, you’re passionate, whoever you want to be you can do it”. 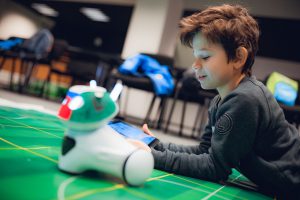 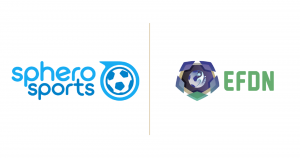